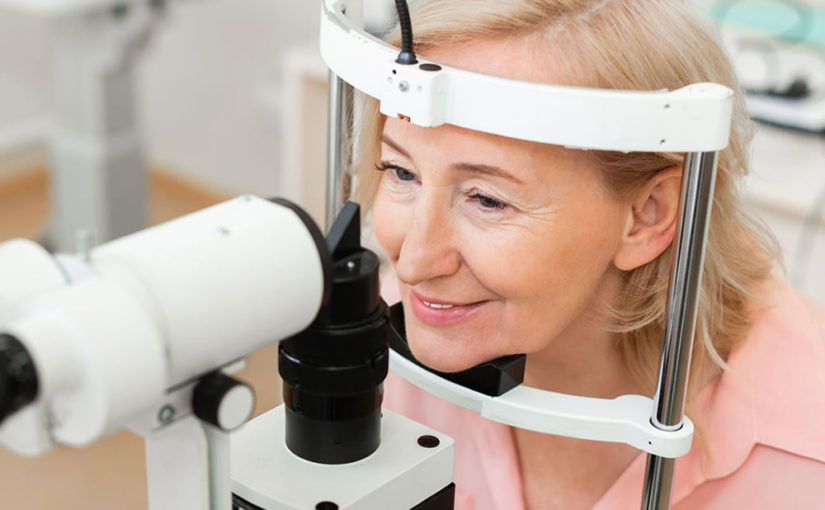 Age Related Macular Degeneration is commonly divided into two types, dry and wet. Dry is a very slowly developing wear and tear of the retina at the back of the eye. Some people develop the wet form where new blood vessels grow under the centre of the retina. This can make central vision worse over a matter of weeks.

The blood vessels at the back of the eye are classified into 2 main groups by their appearance on the fluorescein angiogram. These are called classic and occult. Photodynamic therapy works best for the treatment of classic blood vessels.

Vascular endothelial growth factor (VEGF) is a naturally occurring compound that is present throughout the body and the eye. It has many roles in maintaining the normal state of the retina and its blood vessels, which are only poorly understood. There are several different forms of VEGF.

One form in particular is greatly increased when new blood vessels form as part of Age Related Macular Degeneration. There are now available new compounds that are injected directly into the vitreous in the middle of the eye that block VEGF.

“I would like to say a huge thank you for your skill, expertise and professionalism in your approach to and care of myself.” Mrs U, Devizes

There are currently 4 drugs in use, Lucentis, Eylea, Avastin and Beovu

Lucentis was developed from Avastin which is a drug licensed for the treatment of cancer of the bowel. It is part of an antibody that blocks all forms of VEGF including naturally occurring forms. The full blown antibody was thought to be too big to get across the retina to the underlying blood vessels and so the drug company developed Lucentis which has the same active end but is about 1/3 the size. Lucentis is given as an intravitreal injection every 4 weeks.

The main risk of Lucentis is that we do not know what the long-term effects to the eye may be of blocking all forms of VEGF rather than just the form that is greatly increased when new blood vessels grow. So far in all the drug tests carried out there have not been any long-term consequences.

Eylea is a newer form of Anti-Vascular Endothelial Growth Factor Agent. It blocks more of the different types of VEGF. Trials have shown that it is probably as good as Lucentis. The trials have also been shown to suggest that patients could get away with fewer injections of Eylea, but these trials weren’t comparing Eylea with the way we currently use Lucentis and therefore need further study.

Some patients who don’t respond very well to Lucentis may have more benefit with Eylea, particularly if there is swelling underneath the retina (pigment epithelial detachment).

Avastin started to be used in its own right because doctors began to hear of the potential benefits of Lucentis but were unable to use it because it was still undergoing tests. They therefore tried using Avastin and found that in spite of its large size it did get across the retina and seemed to have good effects.

It has the advantage of being much cheaper than Lucentis, but all the safety work and testing that was done on Lucentis has not been done on Avastin.

There have been many thousands of injections of Avastin around the world with no significant problems reported. Avastin has a licence for use in colorectal cancer but not for injections into the eye. The American CATT study and the United Kingdom IVAN study comparing Avastin with Lucentis have published their 2 year results. These suggested that Avastin was similar to Lucentis but probably required more injections.

Beovu is an Anti-Vascular Endothelial Growth Factor drug from the same family as Lucentis and Eylea. Clinical Research trials have shown that it is as effective as Eylea but may be slightly longer acting so that fewer injections are needed overall. Trials also showed that it is generally as safe as Eylea.

In addition to the general risks of intravitreal injections about 4 in 100 patients can develop inflammation inside the eye. The symptoms you could expect from this would be floaters, sensitivity to light eye or discomfort lasting for at least 2 days.

If you develop these symptoms you should contact an ophthalmologist immediately and you may need steroid eye drops. More rarely, patients can develop problems with the blood vessels at the back of the eye (retinal vasculitis). This can lead to symptoms of blurred vision, floaters or patches where vision is missing, but it is more likely to be picked up on examination of the back of the eye.

The back of the eye is therefore examined each time you attend a clinic and pictures may be taken. If this inflammation does occur it is treated with steroids.